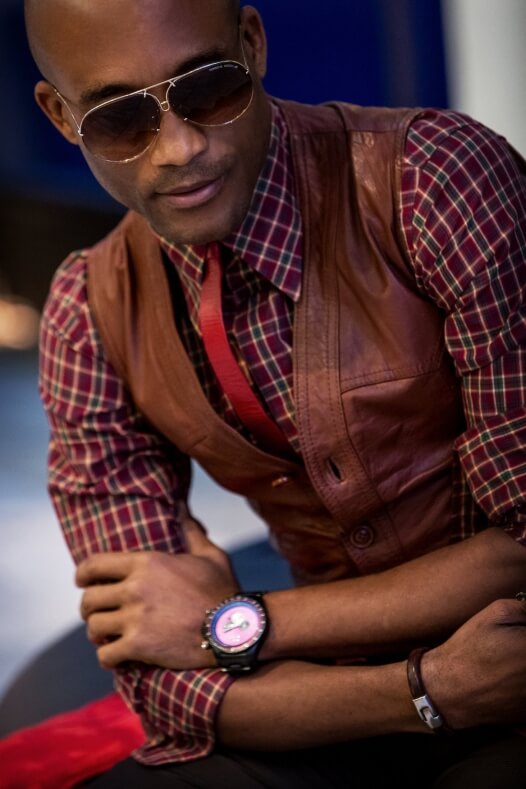 Growing up in eastern Nigeria, Emmy Collins was exposed to the world of clothing and apparel at a pretty young age. His female siblings were trained seamstresses, his God-father had a fabric supply store at the local market, and a couple of machinists who doubled as neighbourhood tailors were down the street from his home. The sound of their table top and foot pedalled Singer 27 sewing machines was ever so present from those tailor shops whenever he walked to and from school as a child. Somehow, he was drawn to the rhythm of those machines, as if he had a future date with them. The deft movements of the tailors’ hands as they swiftly advanced the fabric they were working on through the needle, and that ever so consecutive slice and drop of the heavy tailor’s scissors fascinated him.

In those days in Nigeria, the world of apparel and fashion was not perceived as a viable means of livelihood.  Over time, that perception has changed as apparel and fashion designers are viewed with a measure of deserved respect today. When he was about 13, he recalls his late mom sending him on errands on numerous occasions to his God-father’s fabric store. The errand sometimes included the welcomed task of not only selecting his choice of fabric for outfits worn during festive occasion like at Christmas and Easter, but to also work with the neighbourhood tailors to describe and eventually actualise his preferred designs for the festive outfits. He was often the envy of his friends and boasted proudly about his uniquely styled clothing compared to his friends whose style were often a mimicry of the fashion styles of the time, everyone appear so uniformly but not Emmy. He was different. And he did not outgrow that difference as it would eventually lead to his budding career in apparel design as a young adult in Europe, London to be precise where he lives and thrives as an innovative fashion designer.

This website uses cookies to improve your experience while you navigate through the website. Out of these, the cookies that are categorized as necessary are stored on your browser as they are essential for the working of basic functionalities of the website. We also use third-party cookies that help us analyze and understand how you use this website. These cookies will be stored in your browser only with your consent. You also have the option to opt-out of these cookies. But opting out of some of these cookies may affect your browsing experience.
Necessary Always Enabled

Any cookies that may not be particularly necessary for the website to function and is used specifically to collect user personal data via analytics, ads, other embedded contents are termed as non-necessary cookies. It is mandatory to procure user consent prior to running these cookies on your website.